The sidebar (Portfolio-Sidebar) you added has no widgets. Please add some from the Widgets Page 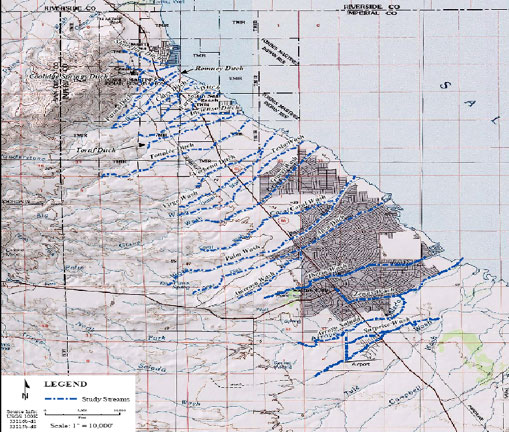 In 2003, FEMA wanted to determine flood hazards for the future development of the Coachella Valley in Imperial County, California, situated along the Salton Sea. Flood hazards along the sea had never been determined. The area included 25 streams, including Arroyo Salada, 82.5 linear miles of floodplain, and 120 miles of drainage area located within the unincorporated area of Imperial County.

The unique geography of the region presented an unusual and difficult-to-predict flood hazard due to alluvial fan and sheet shallow flooding. Alluvial fans are fan-shaped deposits of sediment caused by the path flood water takes coming out of a steep, narrow canyon. This type of flood hazard is difficult to predict, as the water can take a variety of paths as it fans out. Downstream from the alluvial fan flood risk is generally reduced, but can rise again as the water pools in culverts.

The project team pioneered an innovative technique to determine the flood risks downstream of an alluvial fan. This technique was applied by FEMA for the first time ever in California. Only one or two people in the nation have used this technique.

As a result of this project, FEMA is scheduled to publish the Flood Insurance Rate Map for Imperial Counties and Incorporated Areas in August 2008. Development of the area has been approved in areas where the developers can mitigate the flood risks prior to development.